The Harrison Ridge Greenbelt:  A History

Some of our newer neighbors may view the Harrison Ridge Greenbelt as only an undeveloped hillside above 32nd Avenue East between E John and E Denny. However, the preservation of this community green space has been a struggle over a period of 70 years. The Madison Valley Community Council was formed in 1993 to thwart the most recent assault on our urban forest.

During the 1930s, the City of Seattle was still in the process of paving the streets in the Madison Valley neighborhood. One specific paving project involved a pathway directly through the heart of the woods from East Denny Way to East Harrison Street along 33rd Avenue East. However, during the construction, the hillside gave way in a landslide bring the work to an abrupt halt. The project was abandoned and the hillside remained intact. This is the reason that 33rd Avenue East is not a throughway. There remained only one residence on the hillside which was built the 1920s.

In the late 1960s to early ’70s, developers approached the neighborhood with a design for a “Model Cities” low income housing project. The developers’ goal was to construct 25-unit apartment buildings on the site. Among other radical changes, this plan called for significant excavation of the woods for a parking lot to accommodate the large numbers of prospective tenants. However, the builders underestimated the negative reaction and cohesiveness of the Madison Valley community.

The first group to protest the development of this neighborhood forest was the Harrison School PTA (renamed M. L. King Jr. School and currently, occupying the site: MLK F.A.M.E. Center). The protesting group called itself the Harrison-Denny Community Council whose boundaries encompassed the woods. The Council found much support among the Valley residents. With so much support, the organization was able to send a large delegation of residents to the Seattle City Council hearing regarding the federal Model Cities Proposal. During the meeting, there were accusations that the protestors were motivated by a desire to restrict low income people from living within their neighborhood. However, angry African-American representatives countered that assumption with disheartening tales of living within such projects in other cities. They did not want to see another “warehouse” approach as an assistance for low income people.  Appreciating the presentation of the community, and recognizing other problems with the proposed plan, the Seattle City Council ultimately refused to permit the apartment buildings. Their recorded decision was based upon probable geological instability of the hillside.

Once again, the wooded hillside was saved from development. The neighbors relaxed, and over the next few years, lacking a burning issue to rally around, the Community Council was dissolved. However, in the early 1990s, another threat arose which initiated a new alarm regarding the woods.

This time a neighbor across the street from the Greenbelt contacted community activists reporting that a sign had been posted. The sign stated a lot owner’s intent to begin building a house. The owner was contacted and after hearing the community’s wish to preserve the site, agreed to sell his lot to the city. 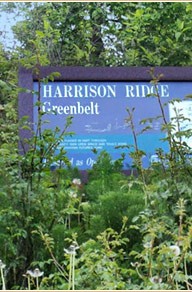 At that time, the City of Seattle had funds to acquire undeveloped land to preserve green spaces in the neighborhoods. Communities were becoming aware of a development boom and were concerned that their beautiful green city would someday be lost to construction. In those days, $600 was the cost of an average lot. This acquisition effort of the City has resulted in the many green spaces you see throughout Seattle neighborhoods today.

One lot owner was not moved by the community’s spirit and refused to cooperate. Again, the appearance of a sign along the street alerted neighbors of an intent to develop the site. The owner had applied for his property to be replatted from 3 into 2 lots and intended to built two large houses. When he realized that the community was moving against his plans, he brought in bulldozers and began clearing the property. After community contact with the City, a stop work order was issued. Subsequent hearings with the City Council resulted in a judgment against the owner.

In an unprecedented move, the City condemned the property under the right of eminent domain. This Washington State constitutional law allowed the government to acquire and preserve pieces of undeveloped property as parks or green spaces. The City was required to pay a fair market value for such land and negotiated a price with the property owner. Several other lot owners agreed to sell to the City and the 6.2 acres of the wooded hillside became officially known as the Harrison Ridge Greenbelt.

Now that the community had realized its goal of preserving the green space, the next step was to care for the property. In 1993, a committee was formed within the newly resurrected Harrison-Denny Council. The group decided to apply for some grant money to carry out a reforestation project. The group received a Department of Neighborhoods Matching Fund Grant for $13,000. With the money, they began a project that spanned two years.

To begin, the committee hired landscape designer Blair Constantine. Blaire surveyed the area and drew up the plans to restore the 6-1/2 acres of land. The woods had been used as a dump site for generations.

In the summer of 1994, students were recruited from the area’s schools as paid workers.

Huge amounts of debris such as old tires, car parts, and abandoned appliances were pulled from the land. Truckloads of invasive ivy and clematis as well as other vegetative waste were cleared. The Parks Department provided trucks and hauled away all the debris.

In the summer of 1995, after the  previous year’s cleanup, five hundred conifers, native plants and shrubs were purchased and planted within the newly cleared woods. Arborist Paul West from the Parks Department oversaw the planting and worked among the volunteers. These plantings occurred after two years of very arduous work.

The next several years brought new volunteer work parties to the greenbelt to maintain the baby plants. As the trees and shrubs began to thrive, the committee members began to breathe easier.

In late 1995, the Council applied for and received another grant concerning the greenbelt. This Small and Simple Grant called for a two part effort to educate the community about the Greenbelt.

The first part concerned the publication of a booklet, City Woods. City Woods was a local story of native trees and plants with a brief history of how the Harrison Ridge Greenbelt was saved. It included illustrations of different plants as well as drawings of historical images. All the art and writing was done by volunteers; only the printing  costs were paid  from the grant money. One thousand copies of the first edition were printed. A second printing, including some new illustrations, followed soon. The booklets were sold for $5 each in local bookstores and at community events.

The second part of the grant concerned the development of a curriculum to teach about local history to the students of Martin Luther King Jr. Elementary School. For eight weeks, volunteers came to the classrooms of grades K–5 and taught about the woodland history of the region and the identification of plant life. Three hundred  copies of the City Woods booklet were given to the school.

Current efforts continue to restore and maintain the Greenbelt as an urban forest. The lone house was sold and moved in the early 2000s. The large empty area became overgrown with weeds due to neglect and a new group of community volunteers was formed. With assistance from the Seattle Parks Dept, the volunteers have cleared invasive vegetation and replanted with Northwest natives. This forest preservation effort is an ongoing and all seasons project.