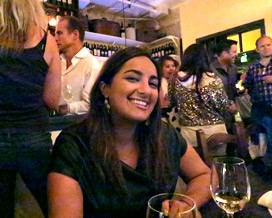 Madison Valley saw the opening of a new dining location — Bar Cantinetta opened its doors at the corner of Madison St. and 29th Ave E on Thursday evening. The soft opening served a limited menu suitable for service as hors d’oeuvres: brioche grilled cheese, country ham BLTs and fried bacalao balls. The event was very well attended: the baked figs wrapped in Speck could not make it 15 feet from the kitchen before disappearing into hungry diner’s hands.

The space has changed a bit from its days as La Côte. A full bar with lots of seating now extends towards the back of the restaurant, facing the open kitchen. Décor is simple, with charming crystalline light fixtures in the main seating area and glowing lamps above the bar. Service was amazingly prompt even with the large crowd, and the entire staff was excited about being a part of the Valley.

Bar Cantinetta is a welcome addition to the neighborhood. The regular menu looks delicious, and promises to vary with the availability of seasonal produce. Entrees are reasonably priced (around $16 a plate), and many appetizers can be had for less than $10. We look forward to fall nights cozied up to the bar, watching the foot traffic go by, munching on some of the best Seattle has to offer. Buon appetito! 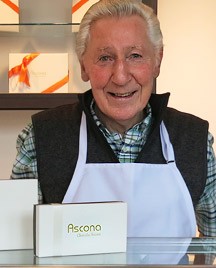 Yesterday Hans Riechsteiner opened a new chocolate store, Ascona Chocolat Suisse. Many of us know Hans as the founder of the Arosa Cafe, and the gentleman to thank for bringing those tasty waffles to the Valley. Many years ago Hans sold his Madison Valley cafe, and went on to open another Arosa on First Hill. Now he’s returned to Madison Valley, this time with the world’s finest chocolates.

Hans is importing Läderach chocolate from Glarus, Switzerland. When I asked him why Läderach, his answer was simply, “It’s the best chocolate in the world.” The Swiss native isn’t new to the chocolate business, either — Hans owned seven chocolate shops back in the ’80s.

The new store, named after Ascona, a posh resort town in Switzerland, is a beautifully designed space with a wide range of chocolate flavors, including Orange Dark, Divine Red Calvados, Pistachio, Champagne, Hazelnut, Naugatine, and Cognac. Assortments of chocolate come in three box sizes: Prices are $18, $38, and $48.

When asked about his favorite part of this new business venture, he said, “I found the exact job I want for the rest of my life. Hopefully, another twenty years.”

A number of local restaurants have endorsed I-522, the GMO labeling initiative. Among them are Nat Stratton-Clarke of Cafe Flora and Thierry Rautureau of Luc. Cafe Flora is participating along with six other Seattle restaurants in the Dine Out for 522 event on October 3rd. Supporters can purchase a passport for $50 then enjoy a small plate at seven Seattle restaurants on that evening. Read more information about I-522; purchase tickets online.

The Northwest Cider Association has announced the third annual Washington Cider Week, a 10-day celebration of craft cider. The events kick off September 5–6 with the Northwest Cider Summit at South Lake Union. Numerous tasting events occur the following week, including at Cafe Flora.

Cafe Flora is hosting the Tieton Cider Works tasting. Tieton owner Sharon Campbell pours through the Tieton lineup and speaks about her farm, as well as what’s new at the cidery. This year she will bring a few bottles of their Precipice Perry that has been out of stock and their two new seasonal releases, Cidermaker's Reserve and Smoked Pumpkin Cider. Cafe Flora is offering a special Cider Week pizza and other menu options.

Crimes in Madison Valley reported to the police during July were up a bit from their June level, returning to a level (approximately 30 incidents) we experienced in earlier months of this year. As in June, car prowl theft (3 incidents) was lower than in earlier months and surprisingly none occurred in the Arboretum. In contrast, there were 9 incidents of property damage/graffiti, a number much higher than in June. Four burglaries were reported during July:

1. Sometime between July 2 and July 15, a burglar broke into a home on 26th Ave. near Lee while the owner was out of town. After smashing through a glass paneled back door, the burglar ransacked the house for valuables. Police were able to recover fingerprints from the scene.

2. On July 21 someone smashed in the front glass door of a business in the 2900 block of E. Madison St. and stole two credit card scanners and a numeric PIN pad. Police found no evidence that might help to identify the thief.

3. Sometime on July 25 between 5 and 9 PM a burglar entered an unlocked apartment on 20th Ave. near Madison and stole approximately $1800 in cash and money orders. Police found no evidence at the scene.

4. On July 29 someone broke into a house on 31st Ave between Pike and Pine. A detailed police report on this burglary is not available.

There was one attempted and one completed robbery during July:

1. On July 5, close to midnight, officers responded to a report of gunshots on E. Thomas St. near 26th Ave. While searching the scene, officers found a victim with a minor gunshot wound who told them that his assailant had pulled out a gun and demanded his wallet. Although the victim tried to give him the wallet, the assailant shot the victim and fled. While responding to the gunfire report, police noted a suspicious Ford SUV driving at high speed at 19th and Thomas, and after taking the victim’s testimony began a successful search for it. The victim did not identify either occupant of the SUV as his assailant, however.

2. On July 23, a little after 7 PM, a young woman was waiting for a northbound bus on 23rd St. near John when a male approached her and asked her to check on when the next bus was coming. As she was taking out her smart phone to do this, he pushed her to the ground and grabbed her phone. After fleeing north to Thomas St, the assailant fled west on Thomas. A bus arrived shortly after the robbery and took the victim to the University of Washington Medical Center for possible treatment. After interviewing the victim there, the police returned to the area of the crime but were unable to find the robber.

Among the other crimes reported to the police during July were two incidents of harassment, two auto thefts, one bike theft and a case of shoplifting. The remaining reports concerned theft and fraud not serious enough to produce detailed police reports. 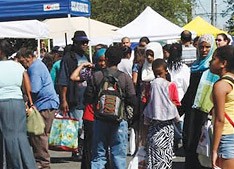 The Central District is holding its annual street fair next Saturday, August 10. The event began in 2002 as the Educational Resource Street Fair, and continues to emphasize children’s education. More than 50 public/private organizations and exhibitors will participate, with music and food, performing arts, talent competitions, arts & crafts, books and computers, and a farmers market. 11:00 AM to 5:00 PM, on 24th Avenue between East Yesler Street and East Alder Street. The event is free. For more information, see their website.