Jan 29, 2015 – Gary Merlino Construction, working on behalf of the Seattle Department of Transportation (SDOT), has demolished the sidewalk on the south side of E Madison Street from MLK Way east to the crosswalk at 28th Avenue E (in front of Jae’s Asian Bistro & Sushi), along with demolition of the northside landing of the crosswalk (the northeast corner of 28th & Madison).

The crews will bulb out the southside sidewalk an additional 5’, creating a shorter and safer crossing for pedestrians, while also making a wider and more inviting pedestrian-friendly sidewalk. Finally, new ADA-compliant curb ramps will be installed on both the north and south landings of the crosswalk.

SDOT’s signal engineers are taking advantage of the sidewalk project to also make some signal upgrades at the intersection. This work should only take several days, with the sidewalk construction crew expected to return next Tuesday or Wednesday (February 27 or 28). At that point, they expect it will take them another five working days to complete the sidewalk restoration.

Questions and/or concerns can be directed to Paul Elliott, SDOT Community Relations, 206/684-5321 or [email protected]

Thank you for your cooperation, patience, and understanding.

There will be no Madison Valley Community Council meeting this month. Community members are welcome and encouraged to attend the meeting of  the Madison Valley Merchants Association, held at 8:30 AM at Cafe Flora on the third Wednesday of each month.

Seattle Parks and Recreation is inviting the community to a public meeting for the Washington Park Arboretum Multi-Use Trail. This community update will be held on Wednesday, Jan. 28, 2015 from 6:30 – 7:45 p.m. at the Arboretum’s Graham Visitors Center, 2300 Arboretum Dr. E.

The Arboretum Multi-use Trail project provides a pedestrian and bicycle loop trail through the Arboretum. The community update will provide information on the design, the construction timeline and impacts to the park and neighborhood. The meeting will focus on the improvements on the south end of the trail. For the safety of pedestrians and bicyclists at the south end of the park, the City is exploring options to make 31st Ave. E a one-way street southbound.

The preferred design presented at a public meeting in February 2014 took into consideration public input from public meetings held in 2011-2012. Seattle Parks and Seattle Department of Transportation staff will be at the meeting to answer questions and collect feedback. The community is encouraged to participate and all are welcome.

In June 2013, City Council approved $7.8 million from the Washington State Department of Transportation to fund implementation of the Arboretum loop trail. This project, as outlined in the Arboretum’s Master Plan, is key in efforts to mitigate the impact of the upcoming replacement of the SR 520 Bridge.

For more information about the project, please visit: seattle.gov/parks/projects/arboretum/trail.htm. If you have questions, please contact Garrett Farrell, Project Manager, at [email protected] or 233-7921.

Madison Valley’s AFH Salon is offering its First Annual “New Year, New You” Makeover Giveaway. They're asking people to submit nominations for a woman who deserves a makeover. The winner will receive a cut and color with Annie Fisher, Framesi products from their salon, and a makeup consultation and lesson with a professional artist. The full package is worth over $400.

If you’d like to submit a name, send an email to [email protected] with a 250-word response as to why your nominee deserves to win. The cutoff date is February 1st, 2015. Nominees may not already be clients at AFH Salon.

During December Madison Valley was the scene of 64 incidents reported to the police, down slightly from November’s total but still well above the monthly average for 2014. Thirty of the incidents were car-prowl thefts, almost double the November total, but no vehicle thefts were reported. The police reports give descriptions of six burglaries during December.

1. On Dec. 1 at around 2 PM a burglar set off an alarm in a home on Harrison near 31st by smashing a window in the front door and unlocking the door. When the owner returned home around 3 PM she found that the burglar had taken a laptop from an office in the residence and a pile of change from a bedroom. She also found that the burglar had left a half-full can of Coca Cola, which the police took in evidence to search for possible fingerprints.

2. On Dec. 11 at 1:30 AM two burglars attempted to enter a specialty store on Union near 24th by smashing open a glass pane in the business’s front door. When they smashed the glass they set off an alarm and video cameras, causing the burglars to flee the scene. The video recording was not good enough to yield descriptions of the burglars, however, and the police K-9 unit was unable to locate any suspects.

3. During the night of Dec. 17-18 someone gained entry to offices in a commercial building on Madison near MLK and stole video equipment worth $500. Because there were no indications of forced entry, the police believe that the burglar(s) had keys to the building. When the business owner tried to notify the police of the burglary on Dec. 18, she was told that the police department’s call load was high and asked to call again on the 19th. When the police arrived to investigate on the 19th, they decided not to look for fingerprints because there were no printable surfaces in the vicinity of the missing equipment and because too much time had elapsed since the burglary.

4. At around 5 PM on Dec. 20, a burglar set off an alarm in a residence on Republican near 30th Ave. E. by kicking in the back door. When the owners returned about an hour later, they found that many lights had been turned on and that many drawers in their residence had been opened. The burglar stole camera equipment and jewelry worth approximately $4700. Police found no fingerprints in the home.

5. A woman called the police on Dec. 26 to report that in the previous few days there had been a forcible-entry burglary at her father’s residence on 23rd near Howell. The burglar(s) smashed open a window on the first floor of the home and then searched for valuables. Because the father was away on vacation, the daughter was unable to specify exactly what had been taken, but police were able to recover fingerprints on a jewelry box.

6. On Dec. 29 at 10:30 PM police responded to a report of a burglary at a residence on 26th near Pine. When they arrived the victim told them that upon arriving home about an hour earlier the back door was open and that it appeared someone had broken into the house through a window on the first floor. The police report states that the burglar(s) stole close to $12,000 worth of property, but does not give details about what was stolen.

Police also received reports of one robbery and one aggravated assault during December.

1. A woman called 911 around 9:30 AM on Dec. 3 to report that she had been punched in the face by an acquaintance who had taken her ID and a credit card. When the police arrived she told them that she and the acquaintance had shared a bottle of vodka during the night in a residence on 19th near Thomas, but that around 7:30 in the morning she discovered that her cards were missing. When she accused the acquaintance of taking them, he punched her twice in the face and left the residence where they had spent the night drinking. After following him to his car and threatening to call the police, the victim returned to the residence and fell asleep. When she woke, she called to determine the balance on the credit card and found that $300 had been spent that morning, whereupon she called 911. The victim told the police that she only knew the robber’s first name and that he lives somewhere in Federal Way.

2. Around 9:30 AM on Dec. 5 two men who were playing ping pong at a location on 19th near John started fighting during their match. The Fire Department medical unit was called and when it arrived the men told told a story about having fallen down during the match. When the police arrived, however, they admitted that they had had a fight. Both suffered injuries and one was taken to Swedish Hospital. Although there were no witnesses to the altercation, staff at the facility where they were playing reported that the two frequently argued during their ping pong games, but that their arguments had not previously escalated into fighting.

Additional information can be found at the SPD’s police reports website. 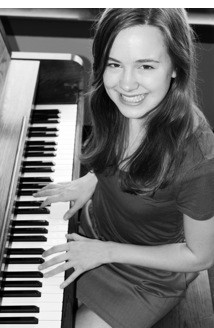 The piano studio of Katie O’Rourke recently relocated from Bellingham to Madison Valley near 24th and Aloha Street.

Katie’s mission is to guide students in a joyful exploration of music through personalized and innovative piano instruction. The curriculum, which places a strong emphasis on physical comfort, note reading and performance, is designed to take students to an advanced level of playing appropriate for college auditions and work as a professional musician. Challenging repertoire also creates an exciting learning environment for adults or children who prefer to play for recreation. Students are encouraged to perform in the Washington State Music Teachers Association Adjudications as well as studio recitals. Group classes provide a fun and inspiring environment for students to practice performing and encourage each other through community.

Katie has recently attended two workshops in Dalcroze Eurythmics, a system of teaching music that includes movement, singing and improvisation. Through her recent exposure to Dalcroze, and past training in the Taubman technique, Katie has developed a unique set of tools to help students with rhythmic and physical difficulties at the piano. These tools, which include improvisation in the classical style as well as free improvisation, provide an opportunity for students to release tension and to naturally internalize rhythm in their bodies. Katie aims to create a comfortable learning environment where new challenges always feel approachable and achievable.

Katie is a Nationally Certified Teacher of Music and has a B.A. in Piano Performance from Western Washington University, where she studied piano with Milica Jovanovic and Jeffrey Gilliam. She also has an additional 5 years of private study with Jeffrey Gilliam with an emphasis in playing mechanics and technique. Katie served as pianist for the Whatcom Symphony Orchestra, and collaborated with groups such as Skagit Opera, Whatcom Wind Ensemble and Bellingham Chamber Orchestra.