Here are the Seattle OPCD and SDCI Land Use notices and City planning activities in the last month for communities from 18th Ave. to Lake Washington and E Union St. to SR-520 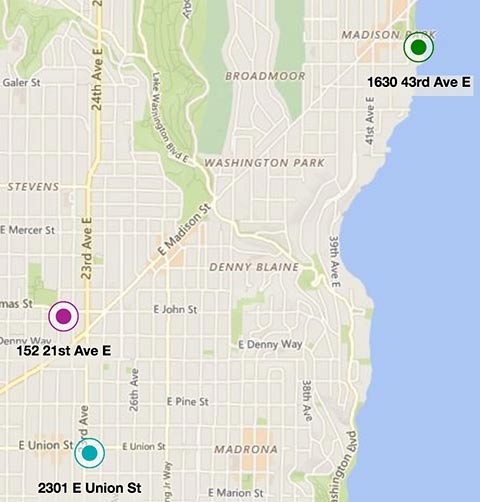 In terms of numbers, 2017’s burglaries, robberies and aggravated assaults in Madison Valley were similar to other years in the recent past. Robberies were up a bit, but as noted in past reports, this is due to what appears to be an increase in shoplifting incidents at the local Safeway store that have escalated into robberies.

Six burglaries were reported in Madison Valley during December. 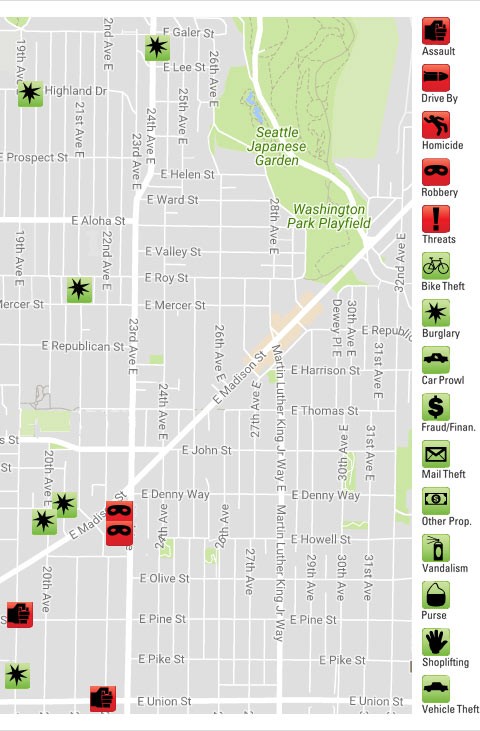 1. On Dec. 1 at around 5 AM someone broke into a storage unit at an apartment building near 19th and Highland. A resident called the police during the break-in and followed the burglar to an apartment building near 18th and Prospect. When the police arrived at that location the burglar had fled south from the building. Further investigation at the 19th and Highland location revealed that the burglar had broken into several storage units there.

2. Sometime during Dec. 8 someone entered an apartment on E. Denny near 20th and took electronic and personal items worth approximately $1200. When the resident returned home that day he noticed that various items inside the apartment were amiss and called the police. The resident told the police that all of his keys to the apartment were accounted for but that one was in the possession of a friend who had recently “fallen on hard times” and who may have a drug problem. The resident also told the police that he would contact the friend and find out what she knew about the burglary.

3. On Dec. 15 at 11:13 PM a surveillance camera monitoring the entrance of an apartment building on 20th near Denny recorded a burglar using a pry bar to gain entry to the lobby of the building. The burglar is described as a white woman, 25–35 years old, wearing gloves and a maroon hoodie under a dark coat and carrying a black backpack with a rolled-up blue sleeping bag attached. Once inside the lobby, the burglar opened the door to a room where packages for residents are kept and proceeded to open two packages. She did not take the contents of the packages, however, and returned to the lobby where she again opened a package without taking its contents. The surveillance video shows her leaving the building at 11:15. The burglar caused approximately $75 worth of damage to the entrance door.

4. On Dec. 17 police were called to a home being renovated on 21st Ave. E near Roy to investigate a burglary that had occurred sometime during the previous 36 hours. The burglar broke in through a piece of plywood that was covering a back window of the home and took approximately $1250 worth of construction tools. Police found no fingerprints at the scene.

5. Sometime between Dec. 25 and Dec. 27 someone broke into a home on 24th Ave. E . near E. Galer St. while its occupants were away for the holiday. The burglar forced the front door open with a crowbar and took musical instruments worth approximately $9500. No fingerprints were found at the scene.

6. On Dec. 28 police were called to a townhouse on 19th near Pike to investigate a burglary that apparently occurred the previous day. When they arrived, a resident told them that earlier that day she had found a backpack belonging to her roommate, who was on vacation, lying in the back yard of the residence. She called her roommate, who told her that there were three credit cards in the backpack, and a check of recent purchases showed that the cards had been used to purchase approximately $500 worth of items. The resident who talked to the police told them that there was no evidence of a forced entry, but that the previous day (Dec. 27) she had found that the front door to the townhouse was ajar. After she closed it she checked her own belongings and found nothing missing. Police found no fingerprints.

There were two robberies reported during December, and both were shoplifting incidents that developed into robberies.

On December 7 at around 11:30 AM employees at the Safeway store on Madison observed a man and woman load items into a hand shopping basket and then attempt to leave the store without paying for the items. When one of the employees confronted the man as they attempted to leave, the man yelled a profanity at the employee. The employee then tried to take the basket away from the man, but the man resisted and then shoved the employee to the floor. The couple then fled the store without the basket. The incident was recorded by the store’s security cameras.

Police were called to the Safeway store on Madison at 9:30 PM on Dec. 13 to investigate a robbery that had just occurred. When they arrived, employees told them that a man and a woman had loaded their grocery baskets with containers of baby formula worth approximately $600 and had tried to leave the store without paying for them. When the shoplifters got to the store exit two employees stood in the doorway and told them to return the items they had taken. The man pushed one of the employees to the floor while the female sprayed the other employee in the face with an unknown liquid that caused a burning sensation. The robbers then fled south on 22ndAve. Shortly after the police arrived at the Safeway store, a 911 call from the resident of a nearby home reported that a man and a woman were having a physical fight in her front yard. When the police arrived to investigate that incident, they found a man matching the description of the shoplifter/robber, and they took him into custody when store employees positively identified him as the robber. Police also found most of the stolen baby formula in the yard where the couple had been fighting, but were unable to find the woman involved in the robbery and the fight. During questioning the male claimed that he had not been in the Safeway store than night, but that shortly before he had been apprehended he had had a fight with an unknown “Mexican guy” who sprayed mace in his face. The police, however, believed the store employees who had identified him as one of the robbers and concluded that the female robber had sprayed her accomplice during their fight. The police booked the man into the King County jail. Security cameras recorded the incident and there was also a witness present.

Finally, there were two aggravated assaults reported during December.

At around 3:40 AM on Dec. 17 police received multiple reports of gunshots in the vicinity of 22nd and Union. When the police arrived, people who had heard the shots reported that several cars had sped away from the scene after the shooting. Police found multiple cartridges at the scene, and a transient who had been sleeping nearby told them that “a group of kids” had been congregating at 22nd and Union before the shooting. At 4:30 AM the police were informed that a man with a gunshot wound in his leg had been taken to the emergency room at Swedish Hospital. When interviewed, the victim told police that he had been walking toward his car, which was parked at 19th and Union, and had just crossed 22nd when he heard gunshots. When he looked in the direction of the shots he saw a man aiming a gun at him so he ducked behind a car. When he tried to run from behind the car he realized that he had been shot. Fortunately, he was able to flag down a passing motorist who took him to the hospital. The victim told police that he didn’t know anything about what had produced all the gunfire.

On Dec. 27 at 12:30 PM police responded to a reported assault at a house on 19th near Pine. A woman who was living in the house told police that she was packing in preparation for leaving because she had been evicted, and that another resident had demanded that she pay him $800 that she owed him. The victim denied that she owed the money and an argument ensued during which the other resident pushed a bookshelf over in an attempt to injure her. When he failed to injure her, he smashed her cell phone on the floor and she fled the house to call the police. When the police searched the house for the assailant’s belongings, they found a packet of what appeared to be methamphetamine and a stun gun. A check of police records showed that the assailant is the chief suspect in another aggravated assault at a nearby location that involved a stun gun. The victim was advised that she should notify the police immediately if she sees her assailant again.

Hello and Happy New Year! Its time for our annual winter clearance sale. Save 30–70% on all of our fall/winter inventory. We have a ton to choose from, bring a friend :) Sale starts Sat. Jan. 27 at 10 am. 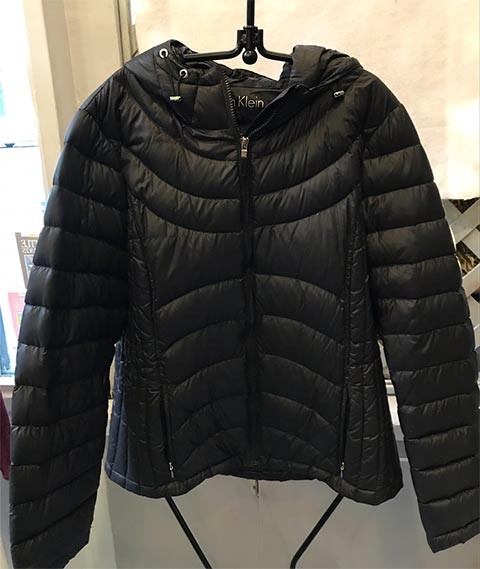 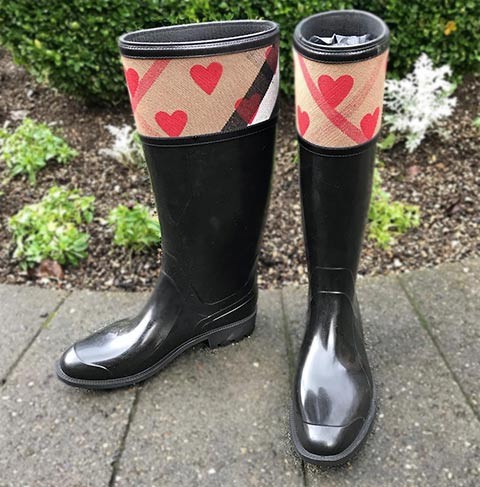 Thanks to you, Fury has been here 32 years!  Watch for a special sale in mid-March to celebrate our 33rd anniversary.  Current events and new arrivals can be found on our Instagram and Facebook pages.

If you are interested in a private shopping party, please contact us for more details. We would love to host your girls day or night out!

"After Hours" at Baas Framing Studio

The first gallery art show of the year at Baas Framing Studio is “After Hours,” featuring art from the staff to showcase their creative talents outside of what they do during business hours. 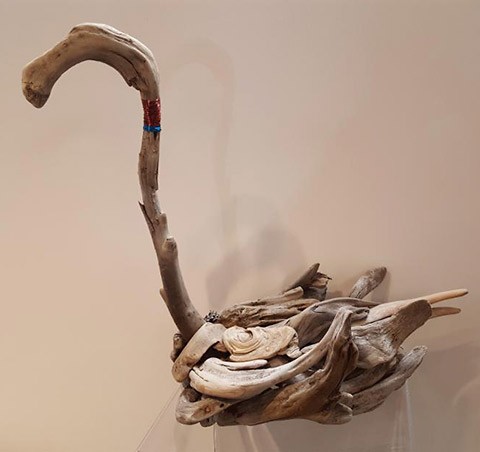 Baas exhibits sculptures inspired by animals and birds. Made of driftwood pieces gathered on the Elwha River, these works embody the forces of nature in their delicate construction. The aged wood fragments were released with the removal of the Elwha Dam and gathered by the artist on rejuvenating journeys to the Olympic Peninsula. 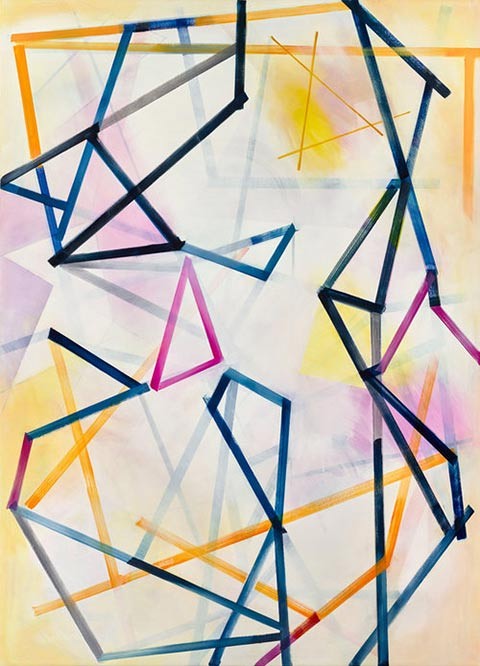 Ricketts exhibits new abstract oil paintings. Each piece is built from repeated brushstrokes of different lengths and widths. The use of repetition evokes architecture and creates a rhythmic language that is enhanced by strong color choices. Within a limited concept, infinite variations are possible. 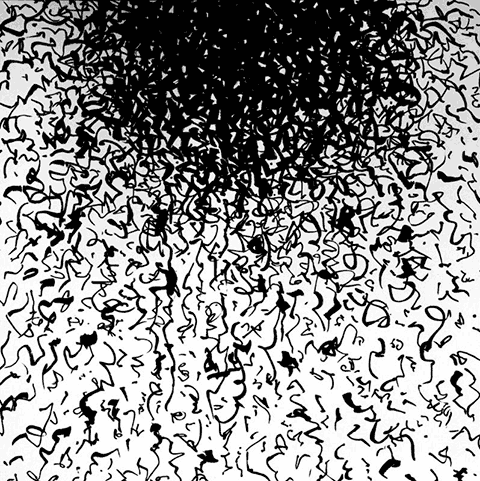 Taking influences from automatic writing, Japanese Zen brush painting, and abstract expressionists like Mark Tobey, Keller creates works that are simultaneously active and meditative. His works employ techniques drawn from stochasticism and Eastern approaches to existentialism. This will be his first gallery showing in over ten years and the first exhibiting his new direction.

Do you own a business in Madison Valley? Would you like to meet and network with other business owners in the Valley? Then join us for the first Merchants Association meeting of 2018.

On the agenda for January’s meeting: We’ll be discussing our yearly activities, the Spring Clean and Holiday Lights. We’ll also talk about the community bikes program and what, if any, feedback we want to give the city about it. Also up for consideration is the direction of the organization and how it can meet the needs of the members.