Here are the Seattle OPCD and SDCI Land Use notices in the last three weeks for communities from 18th Ave. to Lake Washington and E Union St. to SR-520. 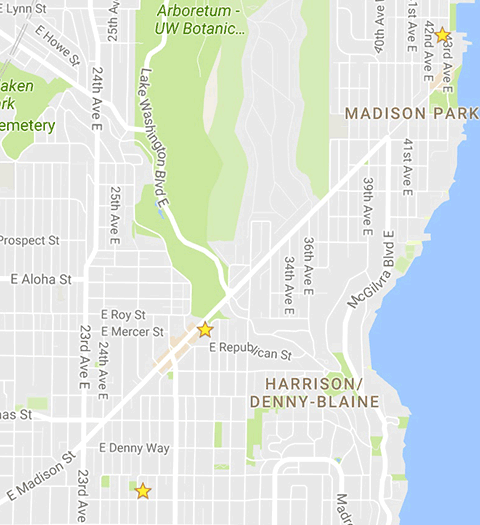 The Seattle Department of Construction and Inspections (SDCI) is currently reviewing the application for, and will hold a public meeting to gather comments on, Land Use Application to allow a 6-story building consisting of 82 residential units above 26,250 sq. ft. of retail space, located at ground level. Parking to be provided for 140 vehicles at and below grade. Existing structure to be demolished. Zone: Neighborhood Commercial 2-30′ Pedestrian, Neighborhood Commercial 2-40′ Pedestrian, Single Family 5000, Liquefaction prone soils, Steep slope (>=40%), Arterial within 100 ft.

Land Use Application to subdivide one development site into two unit lots. This subdivision of property is only for the purpose of allowing sale or lease of the unit lots. Development standards will be applied to the original parcel and not to each of the new unit lots.  Zone: Lowrise-1, Potential slide area

Steve Lorton, former Pacific Northwest editor of Sunset Magazine will lead this walking tour and share stories about Madison Park’s oldest resident flora and some recent young ones, too. It’s a great opportunity to learn more about the neighborhood. Great for kids and grandparents and friends. Enjoy lunch in Madison Park after the walk. Sponsored by the Madison Park Community Council. 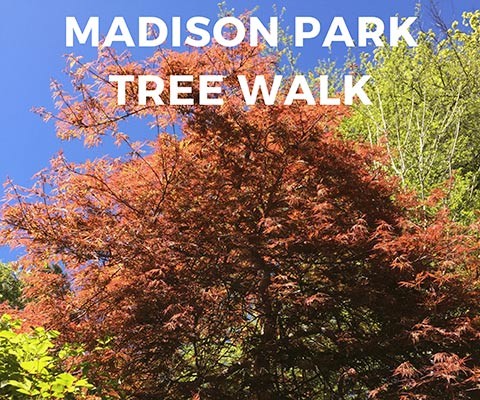 Car prowls and vehicle theft in Madison Valley during April dropped from the 25 incidents in March to 12, driving the overall number of incidents reported to the police down to 56. Reported burglaries dropped from eleven to nine, but there were three reported robberies. 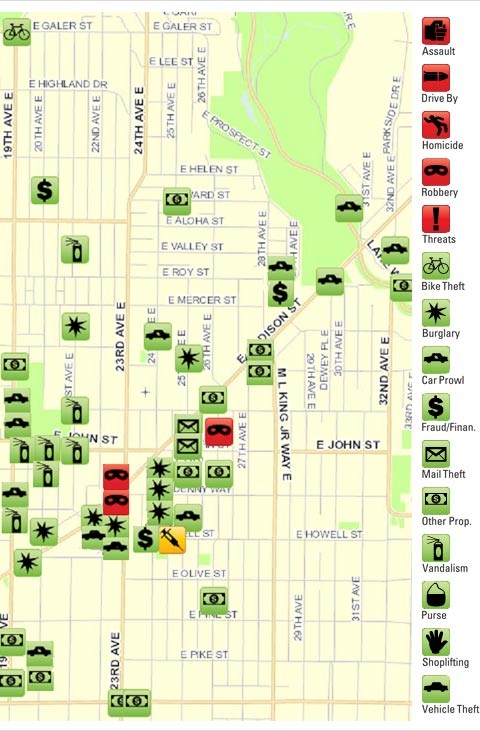 1. On April 9 at 7AM a burglar, described as a white female in her late 20s or early 30s with sandy brown hair, gained entry to an apartment building on 20th near Madison. Once inside she also gained entry into locked storage areas inside the building. The building manager was unable to determine whether anything had been taken during the burglary, but was able to provide the police with video footage of the event.

2. On April 10 between noon and 2 PM someone kicked open the front door of a residence on 25th near Mercer and rummaged through the house. Although there were valuables in plain sight in the home, the burglar apparently took nothing. Police found no fingerprints at the scene.

3. Police were called to a pharmacy on Madison near 22nd at 5:20 PM on April 15 to investigate a burglary that had just occurred. When they arrived, the pharmacist told them that a man had jumped over the counter into the secure area of the pharmacy and stolen several bottles of medicine. The burglar and an accomplice then quickly fled. Police obtained a video tape of the incident that had been recorded by security cameras.

4. Sometime between April 15 and 17 someone broke into an apartment complex under construction on 24th near Denny. The burglar tried to break into a storage area in the complex with a pry bar, but was unsuccessful. The burglar also broke into a construction trailer at the back of the complex, but at the time of the police report it was unclear whether anything had been taken from the trailer. Police were not notified of the burglary until April 21, so police did not search for fingerprints because many people had been in the area between the time of the burglary and the arrival of the police.

5. During the afternoon of April 19 a burglar broke into a residence on 21st near Republican by smashing open a basement window. Once inside, the burglar took electronic equipment and jewelry worth at least $1000. The burglary was discovered when a resident returned home around 4:00 PM, but the police were not notified until 10:30 that evening.

6. On April 20 police were called to investigate a possible burglary at an apartment building on 24th near Howell. When they arrived, a resident told them that he had found the door of the building’s storage area open and that several of the storage compartments inside the area had been forcibly opened. Police were unable to determine whether anything had been stolen from the compartments, however.

7. Shortly after 6 PM on April 25th police were called to a building in the 2100 block of E. Madison to investigate a burglary in progress. When they arrived, the complainant told them that upon hearing strange noises she investigated and found that someone had cut the lock on a gate outside a shed. When she investigated further she found someone standing outside the shed with a bag containing items taken from the shed. When she yelled at the burglar, he dropped the bag and fled.

8. On April 26 the manager of an apartment building on Madison near 19th observed a woman gaining entry via the building’s call box. Once inside, the woman, described as a white female aged 25–40 with blond hair, entered one of the building’s restrooms where she remained for a while before leaving the building. Soon after one of the building’s employees found an empty package that was addressed to a nearby apartment complex. The manager told the police that she believes the woman has been gaining access to apartment buildings through entry codes that are not secure. The police subsequently learned that the woman had been frequently seen around an abandoned house in the neighborhood. The apartment building manager gave the police photos of the woman that had been taken by security cameras.

9. Late at night on April 29 a burglar entered an apartment building on 24th Ave. E. near Denny and stole packages from a mail area. The apartment manager supplied police with a video of an unknown white male entering the building and taking the packages.

The three robberies included one that began as a shoplifting incident, but ended up being an armed robbery.

1. Shortly after midnight on April 14 police responded to a report of an armed robbery at the grocery store on 22nd and Madison. When they arrived, an employee told them that a man had threatened him with a knife and then stolen approximately $300 from his cash register. After grabbing the money, the robber fled south from the store. Curiously, the robber is a well-known customer at the store and had even applied for a job there. As a result, the store has information about the robber that the police will be able to use apprehend him. The police also obtained video footage of the robbery.

2. On April 25th at around 11 PM a clerk at the grocery store on Madison and 22nd was threatened with a fire extinguisher by a shoplifter trying to take items from the store. The shoplifter, who thereby committed armed robbery, is known by employees of the store and police were given video footage of the incident.

3. Early in the morning of April 28, there was a reported strong arm robbery on 26th Ave. E. near John. The victim told police that he had had personal items taken during a physical altercation with an acquaintance that occurred after they had been drinking with friends. The victim refused medical assistance.

The Harrison Ridge Greenbelt: A History of Community Activism, Chapter 5

In the first four chapters, we learned of the past 20-year history of our Greenbelt. Now we come to today’s restoration efforts.

Continued work in the Greenbelt has been done by two sets of neighborhood volunteers. First, Evelyn Hall and I worked together for a few years. Then, the past three years have been under my and Trina Wherry’s stewardship. 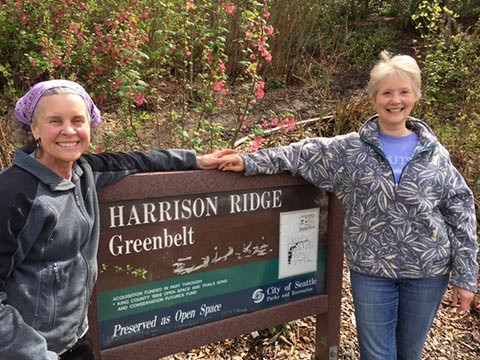 As restoration efforts expanded the area cleared and planted, maintenance became almost unmanageable for just two stewards. We were so busy maintaining the newly planted area that further restoration was incremental in spite of our best efforts. We were feeling overwhelmed.

Three years ago, however, the Bush Middle School students and their teacher, Ben Wheeler, rescued us. Ben began to teach a class in Urban Forestry as part of Bush’s elective curriculum. About a dozen eager students come to the Greenbelt twice a year and have made a huge contribution. Ben does some classroom teaching and then we provide the fieldwork experience. 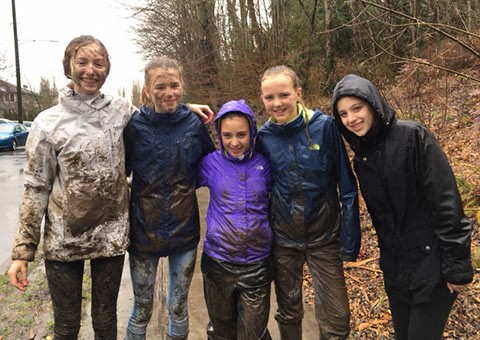 The students use picks and loppers to remove invasive plants such as ivy and blackberries. They create “life rings” around trees to protect them from the invasives. A layer of burlap and wood chips is then put down over the newly bare areas.

Each session has its own rewards. In spring, the students experience the bare branches of shrubs and trees at the beginning of their session and then delight in the leafing out and flowering that occurs over the weeks.

Fall’s reward is the installation of new plants. The Parks Department delivers a treasure trove of native ferns, trees, and shrubs that were ordered by the Greenbelt’s forest stewards. It’s tons of fun to plant the new forest baby plants.

Both classes do ongoing maintenance in the older areas. Seattle Parks Dept with Forterra provide all the gloves and tools in a big, locked job box on site. The students come to the Greenbelt for five weeks and do the work that it would take us several months alone. There are no adequate words to describe our appreciation. 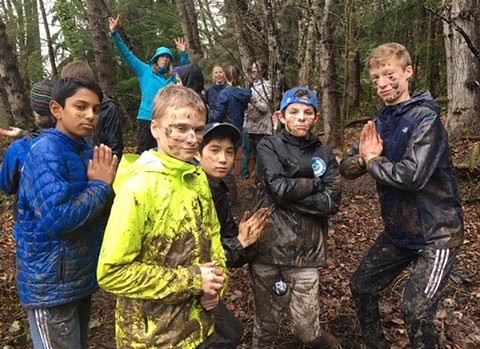 Trina and I also meet at the site at least yearly with the Forterra volunteer coordinator, Andrea Mojzak, Seattle Parks gardener, Sara Franks, and our new plant ecologist Will Pablo. We walk the site with them and discuss problems, solutions and future plans. It’s wonderful!

This year the trees and shrubs we planted in 2011 are finally becoming part of the larger forest. It’s quite a beautiful sight and an integral part of the community.

The Harrison Ridge Greenbelt is still a large wild area in need of ongoing restoration and maintenance. Although we are squeaking by with the Bush School help, it would be so much better to have some involvement from the community. We have not been successful requesting volunteers from the neighborhood even with small events. We are trying again to encourage participation with an upcoming work party.

Trina and I will host a summertime work party to introduce this community treasure to the neighbors and perhaps spur interest in ongoing support. We certainly hope to see YOU there!

Saturday, July 15, 10AM to noon
32nd Ave E between E John and E Denny. (signage will be in place)
All tools will be provided but bring your favorites if you prefer.
Coffee and snacks provided
Restroom facilities at nearby businesses
Contact: Cathy Nunneley [email protected]

It’s because of neighbors like you who appreciate the natural beauty of the Greenbelt that we have been able to save this little sliver of forest for ourselves and future generations.

Seattle Beer Week has begun and we’re throwing our hops-soaked hat in the ring with the presentation of Puss ’N Pints on Wednesday, May 10th — a unique event wherein you can drink beer AND help kittens.

We’ve curated a line-up of feline-forward brews (Black Raven Kitty Kat Blues Pale Ale, Snoqualmie WildCat IPA, Georgetown Meowsa Double IPA, Kulshan Bastard Kat IPA....you get the picture) — buy one (or two or three) of these select ales and we’ll donate 50% of the cost to MEOW Cat Rescue, a nonprofit dedicated to the health and welfare of cats and kittens in the Greater Seattle area. We’ll have T-shirt and glassware giveaways and the folks from MEOW Cat Rescue will be on hand to answer your questions. Rumor has it they may bring along a purrfectly lovely special guest or two. So join us on Wednesday, drink some NW beers, and support our feline friends!