At approximately 4:00 am, Sunday, November 24th, FURY WOMEN'S CONSIGNMENT was robbed. Thieves broke in through the back door. They stole our safe which contained a small amount of cash, and a few designer purses that were displayed on a shelf. As far as we can tell, nothing else was taken. We suspect that they were customers who knew exactly what they were looking for. When they broke in, the alarm sounded; our alarm company was alerted; and police responded.

The number of police reports in Madison Valley during the month of October increased to nearly sixty, far higher than in previous months. Fifteen of the reports involved car prowl theft, a number that is double the usual monthly total of six or seven. There were also two cases of vehicle theft, ten additional miscellaneous theft reports, and five shoplifting reports at a business in the 2200 block of E. Madison.

During October there were seven burglaries in Madison Valley.

1. During the night of Oct. 12–13 there was a burglary at a restaurant in the 2800 block of E. Madison. The burglar(s) used a key from a lockbox to gain entry and removed a safe containing computer equipment, approximately $550 in cash, and personal information about regular customers.

2. During the night of Oct. 17–18 someone pried the lock off a storage room door in the garage area of a condominium on 20th Ave. near John St. and stole a laptop, cash, and credit card receipts from the owner’s business. The value of the laptop and cash was close to $1000.

3. Sometime during the night of Oct. 18–19 someone broke into a business in the 3100 block of E. Madison by smashing a glass panel in the front of the business. The burglar stole ten to fifteen thousand dollars worth of merchandise and various business records. The police found fingerprints at the scene.

4. On Oct. 22 between 6:30 and 9:30 PM someone entered a home on 22nd Ave. near John while the owners were away. The burglar took a drawer containing jewelry and an iPad. The police found the drawer in the back yard of the residence, but it had been mostly emptied. No fingerprints were found.

5. On Oct. 27 between 10 AM and noon a burglar entered a home on E. John St. near 21st Ave. while the residents were attending church. After breaking windows to gain entry, the burglar stole a laptop computer, several expensive handbags, gift cards, and cash. Police recovered fingerprints and the police report notes that the residence has been burglarized four times since 2009.

6. Sometime between 8 PM and midnight on Oct. 31 a burglar broke into a home on 21st Ave. near Pike while the owners were away. After smashing windows at the home, the burglar took computer equipment, cameras, a purse and a box of checks. The police report makes no mention of finding any fingerprints.

7. During the night of Oct. 31–Nov. 1 a burglar broke into a specialty store in the 2700 block of E. Madison St. by forcing the rear door open. The burglar removed computer equipment and many clothing items. The police report gives no estimate of the value of the stolen items, and the police were unable to find usable fingerprints.

1. On Oct. 5 around 7 PM a woman reported that while standing on the corner of 22nd Ave. and E. Union and talking to friends, a man about 6 feet tall grabbed her iPhone and ran east on Union. She did not pursue the robber because she was afraid that he was carrying a weapon.

2. On Oct. 13 at about 7 PM a woman walking west at Union and 23rd was accosted by a man on a bicycle who grabbed her arm and demanded that she hand over her purse and cell phone. At first she resisted, but upon realizing that that the robber had an accomplice, she complied. The robbers fled the scene and the victim reported the incident to a Metro driver. The victim reported that the bicycle rider had an unusual accent suggesting that English is not his native language.

3. In a puzzling incident on Oct. 23, police were notified around 10 PM that a man with a bloody face was lying in the intersection of 28th and E. Helen. Upon arriving they found the man, who appeared to be intoxicated and who told them that over an hour earlier he had been accosted by three black males as he was walking from 1st and Cherry to a destination in the 3000 block of E. Cherry. He reported that they had knocked him to the ground and taken $30 from his wallet before fleeing eastward into the arboretum. The report does not state how the victim and his assailants arrived at a location so far from his walking route on Cherry St. The Seattle Fire Department treated the victim for facial cuts and bruises and transported him to Harborview Medical Center.

Finally, on Oct. 4 at midnight police were called to 22nd Ave. and E. Mercer St. to investigate reports of a large fight there. Upon arriving they witnessed several people fleeing the area, but were able to talk to witnesses and victims of the fight. Apparently there had been a large party in a nearby house that had erupted into a fight after one of the partiers took umbrage about being bumped while dancing. Two people tried to break up the fight but were themselves assaulted by others using brass knuckles. The fighting then moved into the street, where hand guns were fired. Police found six shell casings from two handguns at the corner of 22nd and Mercer, but apparently no one suffered gunshot wounds. Those hurt during the fighting either were treated for minor injuries by the police or refused treatment.

Tell Us What You Think: Designs for New Landmark

The City of Seattle and the Madison Valley Community Council are looking for comments on these preliminary designs for a new neighborhood landmark. The structure will be built on the traffic triangle at Madison and 28th Ave E.

This feedback will be used to create a third and final design. There is no need to “vote” on one design or the other; commenters can like or dislike features from either. Clicking on the illustrations will open up full-size versions in a new window.

Two columns are added to each side of the large tree and signage with the words Madison Valley on a curved sign. Final design for the columns and sign TBD.

Uses more of the triangle space
The large tree in front remains, but is trimmed to increase visibility
A rounded bench is built into the design
A planting strip in front to protect pedestrians from traffic

Design Two contains some additional improvements to the area. These could be incorporated into either design, if people like them:

1. Adding curb bulbs to the corner in front of Luc and Jae’s. This would slow traffic in the intersection and improve the pedestrian crossing.

2. Paving the concrete and sidewalk with a decorative pattern to distinguish it as a place.

In conjunction with the landmark construction, the nearby crosswalk (in front of Luc), which terminates in a tree trunk, will be rehabilitated, either by moving the crosswalk or removing the tree.

• Please take a few moments to fill out the online survey. The last question, #10, is for any general or specific comments you’d like to us to hear. Thank you!

These design options will be discussed at both the Merchants Association meeting and the Community Council meeting. Anyone is welcome to attend these neighborhood meetings.

If you have questions or additional comments regarding the Madison Valley Triangle Project, please contact [email protected]

This little Cavalier is about 8 weeks old. Her people hadn't chosen a name yet when she came in to get fit for a harness.

Noodle, a 13-year-old rescue who loves walking on her leash in the store!

Dakota, a three-month-old border collie/golden retriever mix who decided All The Best Pet Care was the best place she's seen so far.

Jax is about 6 months old and was born completely blind. 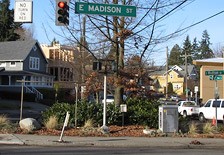 Madison Valley residents are urged to stop by Luc next Saturday to give feedback on the design of the new landmark being built at the traffic triangle. GGLO, the design firm working on the project, and officials from the city will be present to take your comments. Complimentary coffee will be served.

Bring your friends and neighbors, drop in for a few minutes, learn a little about the project, and share your thoughts. Everyone is welcome—the more community feedback, the better, and the more likely we are to receive funding.