Here are the Seattle OPCD and SDCI Land Use notices and City planning activities in the last three weeks for communities from 18th Ave. to Lake Washington and E Union St. to SR-520. 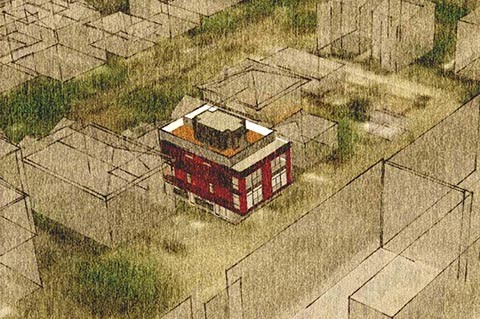 Land Use Application to allow two, three-story single-family dwelling units. Existing structures to be demolished. Surface parking for one vehicle to be provided. To be considered with project 115 27th Ave E for shared access and parking. Zone: Lowrise-1, Potential slide area 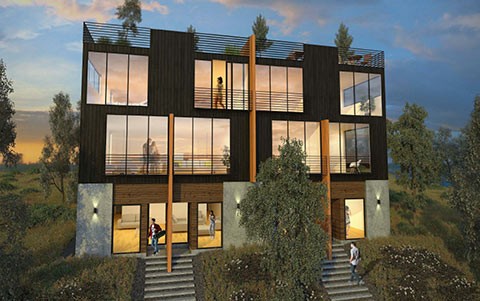 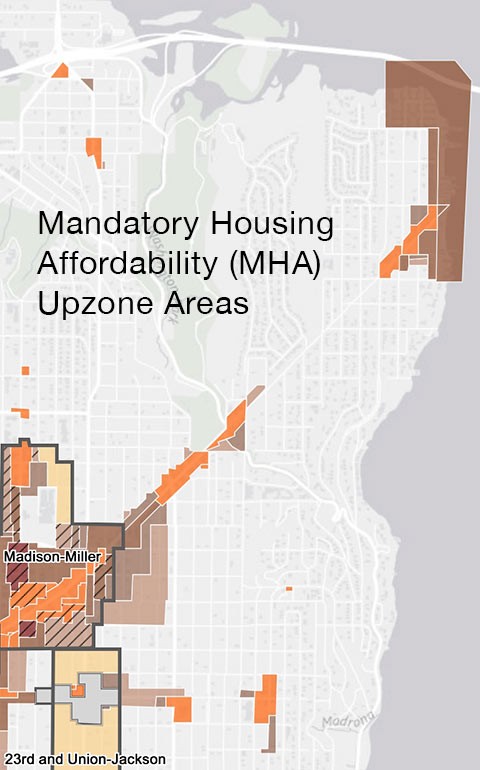 Airbnb tax (12:34 pm Nov 24)
The Airbnb flat tax is excessive. It would be much more reasonable to set the tax as a percentage of the nightly rate. For example, in the winter months airbnbs in Seattle are commonly available at rates as low as $40/night. The $14/night constitutes a 30% tax. Not reasonable.

Seven burglaries, one robbery, and an aggravated assault were reported to the police during October, very close to the Madison Valley average monthly totals for each of those kinds of incidents.

An interesting feature of the robberies in Madison Valley, at least during the last year or so, has been that roughly half of them have involved shoplifting attempts that escalated into robberies. When a shoplifter is confronted by a store employee and then pushes or strikes the employee, or even threatens to do so, the shoplifter becomes a perpetrator of a “strong arm robbery.” Should the shoplifter strike the employee with an object that could conceivably cause an injury, or threaten to do so, the shoplifter becomes an armed robber. In one incident during the past year, for example, a shoplifter threatened an employee with a screwdriver, and thereby committed armed robbery. The vast majority of shoplifting incidents in Madison Valley that are reported to the police originate at the Safeway store at Madison and 22nd. This is due both to the high volume of business at that location and to the fact that it is well defended by security cameras and vigilant employees. As a result, the Safeway store, although a relatively safe location for customers, has lately been the scene of roughly half of all robberies in Madison Valley, and the typical robbery victim in Madison Valley is a Safeway employee who is trying to stop a shoplifter. One such robbery occurred during October.

One of the seven burglaries in Madison Valley during October also took place in the Safeway store. 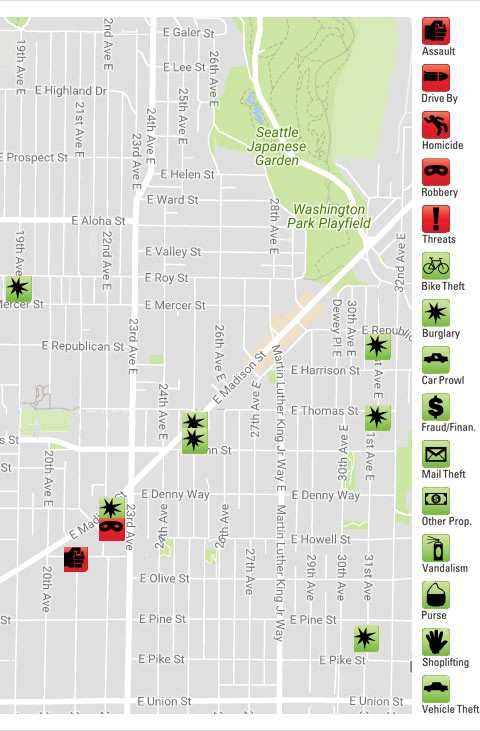 1. Shortly after 6 AM on Oct. 10 police were called to the Safeway store to investigate a burglary that had just occurred there. When they arrived, a manager told them that a man had entered the stockroom area at the back of the store and had removed a case of whiskey. After leaving the stockroom area he met an accomplice outside of the store’s public restrooms and they began to stuff the liquor bottles in their pants and jackets. As they walked toward the store’s exit an employee from the meat department confronted the accomplice, who at first claimed that he had no liquor bottles. When the employee insisted that he did have some, however, the accomplice stopped, placed four of the bottles on a deli counter, and then fled. The employee followed the burglars outside and witnessed them getting into a gold Nissan Pathfinder without license plates, which then fled northeast on Madison. Security cameras recorded all of the events inside the store and an employee reported that he recognized one of the burglars because he had previously stolen items from the store.

2. On Oct. 14 police were called to an address on 25th Ave. E. near Madison to investigate a storage unit break-in. When they arrived, the owner told them that sometime between early Sept. and Oct. 6th a burglar had broken the lock on his storage unit in the building and stolen items worth approximately $4800. The police found no fingerprints at the scene.

3. On Oct. 19 at around 6:20 PM a burglar entered a restaurant on 19th near Roy through a side door. He then entered the restaurant’s business office and after spending a little time rifling through desk drawers, took an employee’s purse from a coat hanger in the office and left via the side door. The purse and its contents were worth approximately $1300. The incident was recorded by the restaurant’s security cameras and police found fingerprints left by the burglar.

4. Police were called to a residence on 31st Ave E near Harrison at 2:30 PM on Oct. 26 to investigate a burglary that was in progress. When they arrived, the owner told them that when she returned home from work she thought she heard noises coming from inside the house and when she entered she found items out of place on the floor. She then thought she heard someone running out of the house and found that a sliding glass door on the side of the house had been smashed open. The police searched the home but found nobody inside. The owner found that one of the bedrooms had been ransacked and that some digital gaming equipment had been taken. Apparently the burglar did not have time to enter other rooms in the house, several of which contained valuable items. Police were unable to find fingerprints at the scene.

5. On Oct. 30 police were called to the same address on 25th E. near Madison as in incident #2 above, to investigate another storage unit burglary. When they arrived, the victim told them that sometime between Oct. 2 and Oct. 6 someone had broken into his storage unit and taken recreational equipment worth approximately $2400. Police did not search for fingerprints because so much time had passed since the burglary, and the police report notes that residents are considering installing a security camera system in the area containing the storage units.

6. On Nov. 5 police were called to a residence on 31st near Pike to investigate an attempted burglary that had taken place sometime after Oct. 7. The owner told them that someone had broken the window of a spare bedroom in the house, but that he hadn’t noticed it earlier. There was no evidence that the person who had broken the window had gained entry to the house and police found no fingerprints at the scene.

7. Sometime between 10:30 AM and noon on Oct. 31 burglars entered a home on Thomas near 31st through an open window in the back of the home. Once inside they ransacked the house and stole approximately $20,000 worth of items, most of them electronic devices. Police were called to the scene shortly after noon, but were unable to find any fingerprints.

On Oct. 15 at about 1:30 PM a couple who were shoplifting paper towels and laundry detergent accidentally ran into the sliding glass doors on the southwest side of the Safeway store while driving an electric shopping cart. This attracted the attention of an employee of the store, who followed the couple into the store’s parking lot and tried to stop them from loading the stolen goods into a minivan. While doing so, he was struck in the mouth by the female shoplifter, after which the minivan fled south on 23rd Ave. The incident was recorded by security cameras, and when the police arrived they were given detailed descriptions of the couple and the minivan. Shortly afterward another police unit located the van and its occupants and found that the couple had outstanding arrest warrants. After verifying that the couple were in fact the shoplifters (now robbers), the police booked them into King County Jail.

On Oct. 1 at 8:30 PM police were called to 21st Ave and Olive to investigate an aggravated assault. When they arrived, the victim, a homeless man, told them that he had been drinking beer with a group of friends behind a nearby apartment building when a newcomer to the group told the others that he wanted the group to start smoking marijuana. When the others in the group told him that they didn’t want to smoke, the newcomer became angry. The victim tried to calm him down, but when he did so the newcomer threw a beer can at him, striking him in the face. The assailant is described as a black male with blond hair, about 6′3″ weighing approximately 170 lb.

There have been numerous posts on NextDoor and other neighborhood blogs regarding thefts of packages delivered to residences. The EastPAC board is pleased to feature, at our next meeting, experts from SPD’s Burglary unit and a representative from a local delivery service to share tips on avoiding package theft.

Our upcoming meeting will be held THIS THURSDAY, a week early to accommodate the Thanksgiving holiday. Don’t miss this important presentation and information meeting!

An artist reception will be held on Thursday November 16th, 6 pm to 8 pm. Come meet the Artists and enjoy cider, wine, and snacks!

We're pleased to feature Sandi's newest body of work "Journeys." Animals, birds, and figurative references abound, and each piece has a compelling presence animated by color and texture. Kiln-fired clay is hand painted in acrylic paint with intricate textures that enhance these beautifully hand-built characters. 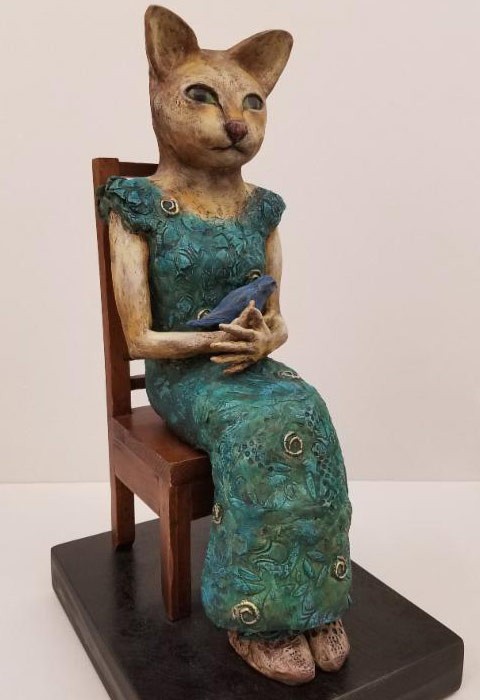 Twyla Dill jewelry combines hand fabricated and cast metals with hand crocheted lace. She uses a lace technique called 'oya', traditionally crocheted on Turkish headscarves. Each piece is crocheted in her signature patterns and style. Lightweight and easy to wear every day or as a signature piece to enhance an outfit. 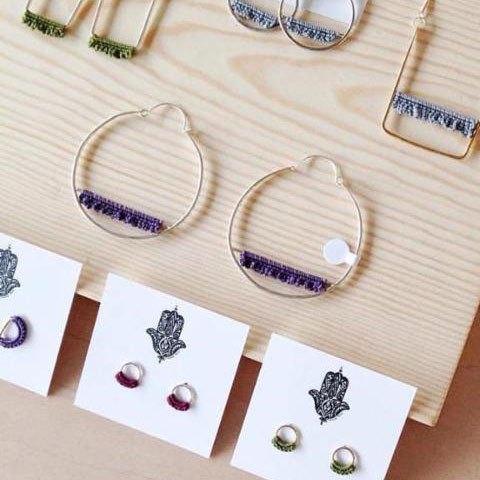 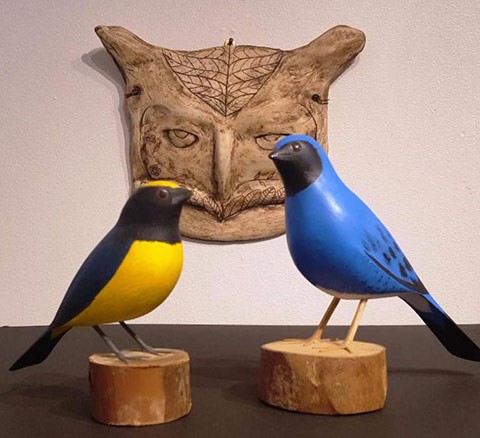 Hand-carved birds from Brazil and ceramic mask by Barbara Clark, $70 – $145

Pagliacci Pizza is giving away free pizza on Thursday to celebrate their five-year anniversary in their Madison Valley location. Limit two slices per person. 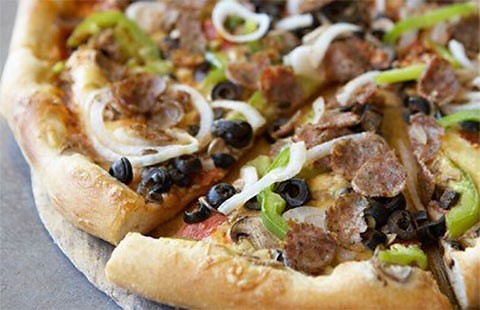 Local yoga studio Live Love Flow is closing its Madison Valley location after four years. Owner Indira AvdiÄ‡ was unable to negotiate a new lease. The last day of operations is November 23. Memberships will continue at the Capitol Hill location. 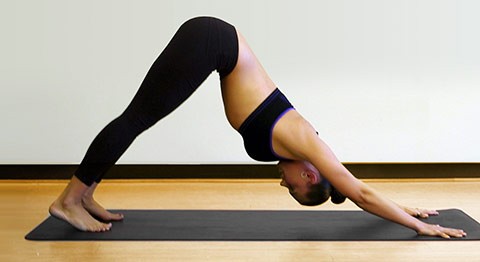