Five burglaries were reported in Madison valley during January, a number similar to the totals of the past several months. 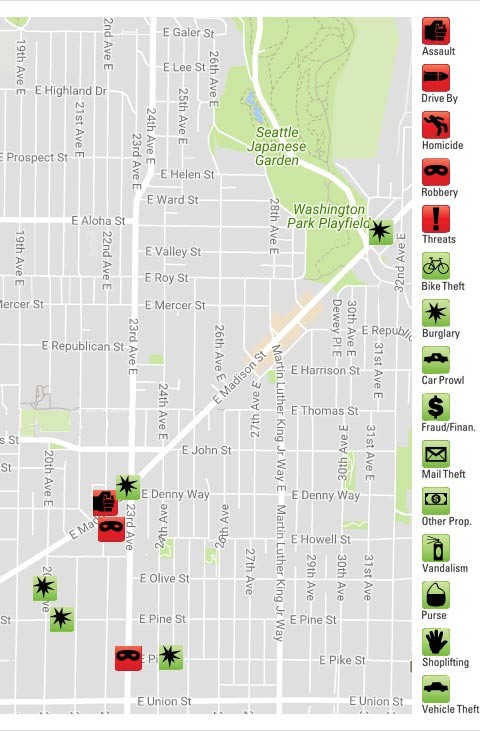 1. Sometime during the night of Jan. 6 – 7 someone used a small wooden stool to smash in the glass door of a building near 22nd and Madison. The building was being used as a storage space, and there was no evidence that the person who smashed the door actually entered the building.

2. Police were called to an apartment building on 20th near Pine at 1:30 AM on Jan. 10 to investigate a burglary in progress. When they arrived, residents told them that they had been hearing noises in the basement of the building. The police then started searching the basement and found that it had been barricaded in in various places. After a few minutes, the police discovered and arrested a burglar dressed only in boots and a jacket. Residents speculated that the burglar had been staying in a nearby condo unit that has been hosting transients who have been engaged in thievery in the neighborhood. The burglar apparently took nothing from the apartment building.

3. On Jan. 14 police were called to investigate a burglary that had occurred earlier that morning at a home on E. Pine near 20th. When they arrived, the resident told them that he had gone to sleep on his living room couch at 2 AM and that when he woke at 8 AM his iPad and wallet were gone. The resident also told them that although the doors of the residence had been locked when he went to sleep, the front door was ajar when he woke up. There were no signs of damage to the front door.

4. Sometime in the early morning hours of Jan. 19 there was an attempted burglary at a residence on Pike near 24th, but the police have not posted a description of the incident.

5. Just before midnight on Jan. 28 there was a non-forcible entry burglary at a business on E. Madison near 31st, but the police have not posted a description of the incident.

In addition to the burglaries, there were two robberies and a shoplifting/assault incident during January.

At around 8:20 PM on Jan. 6 a robber accosted a woman at 23rd and Pine. After grabbing her by the throat and punching her in the face, he threatened her with a knife and demanded that she give him her backpack. When she gave him the backpack, which contained items worth approximately $1700, he pushed her to the ground and fled north on 23rd. The woman ran to her nearby home and called the police, who carried out an unsuccessful search for the robber. The victim described the robber as a white male, over 6’ tall and weighing about 250 pounds, with a partial beard and tattoos on the back of both of his hands. The victim also speculated that the robber may be homeless because his clothes and person were dirty and unkempt.

On Jan. 13 around 11 AM there was a shoplifting/assault reported at the Safeway store at 22nd and Madison. Although the police have not posted a description, their summary report indicates that the incident has been referred to the City Attorney’s office, suggesting that the perpetrator was arrested.

Shortly after noon on Jan. 23 police were called to the Safeway store to investigate a robbery that had just occurred there. When they arrived, a store employee told them that a man had attempted to shoplift food items from the deli and when asked to return and pay for the items, had threatened to strike an employee with a carton of soft drinks. The shoplifter/robber then took the items to his pickup truck, which was parked across the street from the store’s entrance. When another employee followed him outside, the robber opened the door of the pickup and took a dark object from it. The robber then dared the employee to “come on” at which point the employee retreated because he thought the dark object was a handgun. The employee was able to photograph the pickup’s license plate before retreating, however, and when the police determined the owner of the pickup they discovered that there were three outstanding warrants for his arrest. Another police unit discovered the pickup near 14th and Spring a few hours later and the robber was found nearby and arrested. The police found narcotics in the pickup.