Reports of car prowls and vehicle theft in Madison Valley surged from 11 in February to 25 in March, a substantial contribution to the increase in the total number of incidents between February (40) and March (63). During this period burglaries also climbed from six to eleven, although most of the most of those reported in March apparently did not result in the theft of personal belongings. 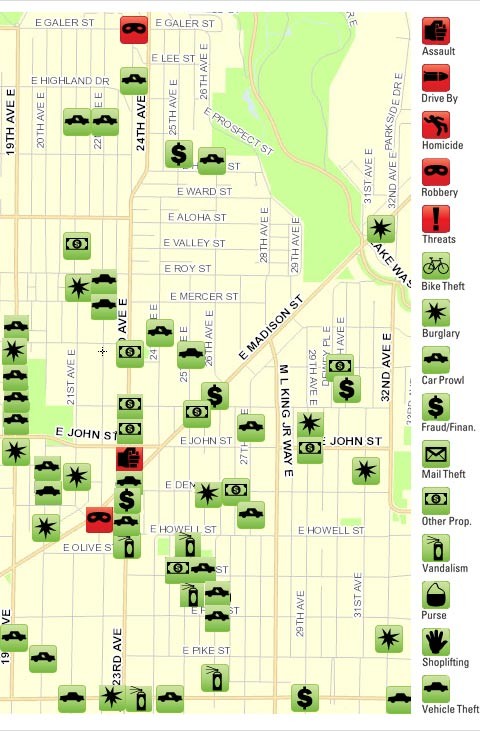 1. Sometime during the night of March 2–3 someone entered an apartment complex construction site on 20th near Madison through an unlocked window. Workers who came to the site on the morning of March 3 found tools and other items strewn about, but apparently the only item stolen was a large TV slated to be used in staging. Police found fingerprints at the scene.

2. Police were called to a business on Madison near Lake Washington Blvd. at around 9:30 AM on March 4 to investigate a sounding alarm. When they arrived the owner of the business told them that a man had set off the alarm by forcing a door open. There were witnesses to the incident and the would-be burglar was identified.

3. Shortly after noon on March 7 a woman working in an office room in her brother’s residence on 19th near Republican observed an intruder, described as white woman with blond hair in a ponytail and wearing a black knee-length coat with a hood, inside the back porch of the home rummaging through bags containing her brother’s clothes. When the woman rapped on her window, the intruder grabbed a few items and left the residence at which point the woman went into the alley and yelled that she was going to call the police. The intruder then dropped the items she had taken and fled. When they arrived at the scene, police found no one matching the description of the intruder in the neighborhood.

4. On March 9 at approximately 4 PM a woman returning home heard noises in her apartment as she entered. When she got inside she found that someone had been rummaging through the apartment. Neighbors had noticed a strangely parked vehicle shortly earlier, and gave police a detailed description of it. In addition, security cameras recorded the burglar. At the time of the police report there was no indication that anything had been taken from the apartment.

5. Also on March 9 a resident of a home on 21st near Mercer reported an apparent attempted burglary. Someone had tampered with a window on the north side of his home and forced it out of place while doing so.

6. When two residents of a home on E. Thomas near 29th stepped outside the back door for a smoke at 9 PM on March 16 they found a man trying to force open the basement door. The residents yelled at the would-be intruder who then left the scene. The residents could not describe the man when the police arrived.

7. Sometime between March 17 and March 24 someone was able to enter a room that contained a master key box at an apartment building on Denny near 25th. The burglar broke open the key box and took keys to eleven apartments in the building. Police did not find fingerprints at the scene.

8. On March 21st police were called to a residence on 32nd near Pike to investigate a burglary. When they arrived, the resident told them that when she returned home that day she found that her front door open and that her vehicle was missing. Further investigation revealed that someone had entered her home by breaking a first-floor window. Once inside the burglar stole various items not specified in the police report, and also apparently handled various objects, including a vodka bottle. The objects were sent to the police lab to determine if they bore usable fingerprints.

9. Sometime during the night of March 23–24 a burglar entered a building under construction on E. 21st Ave. near John and stole wire worth approximately $400. The burglar, who apparently entered through an unlocked window, did not steal tools at the site. The police found no fingerprints.

11. At approximately noon on March 31 police responded to an alarm at a residence on 31st near John. When they arrived, they found that basement windows at the residence had been smashed, but the would-be burglar(s) had apparently been frightened away by the alarm.

Two robberies and an aggravated assault were also reported during March.

On March 2 at 5:30 PM police were called to 21st Ave E. and Galer St. to investigate a robbery. When they arrived the victim, who had been doing landscaping work at that location, told them that while he was preparing to leave the job, two men had taken a leaf blower and a chainsaw, worth approximately $250 from the back of his truck. When the landscaper approached one of the men to recover his equipment, the man kicked him in the chest to keep him away. At that point, the landscaper retired to the cab of his truck to call 911 and the robbers sped away in a beige or silver Chevy Suburban. The landscaper declined medical attention and told police that he wouldn’t press charges and just wanted his tools back.

On March 24 at 10 AM a male and female, known to be chronic shoplifters, tried to shoplift items from the grocery store on Madison near 22nd. When employees blocked their exit from the west door of the store the female, who was carrying one of the store’s plastic shopping baskets, shoved it into one employee’s chest and the pair turned to go toward the northwest exit of the store. When they were again blocked at that exit they retreated back into the store and started down the stairs leading to the store’s parking garage. The employees caught up with them at the bottom of the stairs at which time the shoplifters physically assaulted the employees. The employees were able to recover the items taken by the shoplifters, however, and the shoplifters fled through the parking garage. Surveillance cameras recorded the incident.

At around 10:45 AM on March 28 police were called to 23rd and Madison to investigate a vehicular assault. When they arrived, the victim reported that he had been passed and cut off by a maroon Ford pickup truck a few blocks north on 23rd. When both vehicles stopped for the stop light at 23rd and Madison, the driver of the pickup started calling the victim names, at which point the victim left his car to confront the other driver. The other driver brandished a knife at the victim and in response the victim yelled to him to come out without the knife and “fight like a man.” When the light changed, however, the pickup truck driver drove ahead and in doing so tore the driver’s side door off the victim’s car and injured the victim. The pickup then fled south on 23rd.