Six burglaries, one robbery and one aggravated assault occurred in Madison Valley during March. An interesting feature of incidents of these types that have been reported thus far in 2018 is that they have been heavily concentrated in the area south of John and west of 26thAve. More specifically, 23 of the 28 incidents that have been reported in Madison Valley during 2018 have occurred in that section. 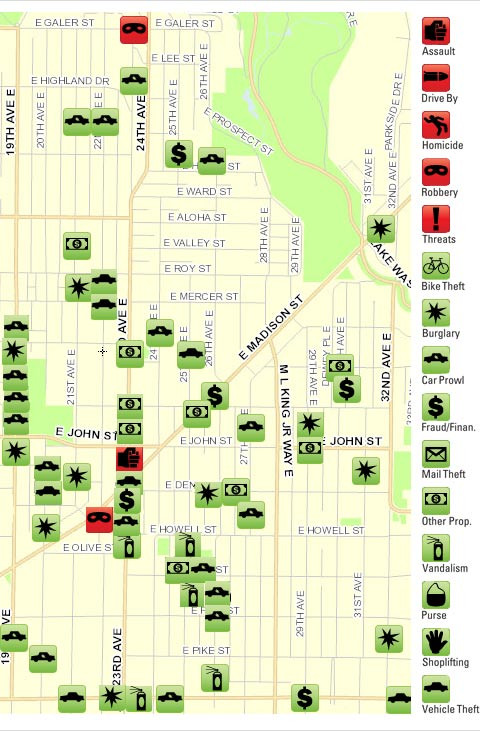 1. Shortly before closing time on March 4 a burglar broke into the liquor storage room at the Safeway store on Madison. Video cameras recorded him loading a backpack with liquor bottles and leaving the room and then the store. The burglar took more than $1000 worth of liquor but left no fingerprints at the scene.

2. At around 12:30 AM on March 8 police received a call reporting a burglary in progress at a home on 20th near Denny. When they arrived, they searched the neighborhood for two men matching the description of the would-be burglars, but were unable to find them. The burglars had been attempting to open a rear window when they were observed by the resident, and the police report states that the resident knows the identity of one of the burglars.

3. On March 13 at 3:40 AM video cameras at an apartment complex on Madison near 20th recorded a man and a woman attempting to break into a storage area in the complex. When a manager of the complex came to work later that morning he found the damage caused by the burglars and called the police. When the police arrived, they were told that the couple might be living in a vehicle nearby, but during a search of the neighborhood the police were unable to find the couple.

4. On March 21 someone opened packages in the mail room of an apartment building on 19th Ave. E. near Republican. At the time of the police report there was no evidence that anything was taken from the packages that had been opened. The police report states that security cameras may have recorded the incident.

5. On March 25 shortly after 2 PM a witness saw a woman, described as being in her 20s, take a bike from the porch of an apartment on Madison near 20th and, accompanied by a man who was also riding a bike, ride away on it. At first the witness wasn’t sure that he had witnessed a burglary, but when he saw the woman having difficulty riding the bike, he took pictures of her with his cell phone and called the police. When the police arrived, he described the burglars and what they were wearing. By chance one of the officers present had investigated a burglary at that apartment complex during February (it was reported as burglary number 5 in the February edition of this report) and he noted that the description of the couple was very similar to very to the couple that had been recorded on security cameras in that incident. However, at the time of the police report it had not been conclusively determined that the two couples are in fact the same.

6. During the night of March 28–29 someone broke into a home being renovated on 30th near Union and took construction equipment worth approximately $2500. Police found no fingerprints at the scene.

There was another shoplifting → burglary incident during March.

A little after 1 PM on March 18 police were called to the Safeway store on Madison by employees who had just experienced a robbery. The employees told the police that they had observed a woman who has been a frequent shoplifter at the store taking packages from the meat department. One of the employees confronted the woman and told her to put down the packages and leave the store. At first the woman ignored the employee, but when the employee attempted to recover one of the packages the woman yelled an obscenity at her and brandished a sharp cutting tool. After unsuccessfully attempting to injure the employee with the weapon, the robber left the store carrying about $100 worth of ribs. Other employees saw the robber enter a car, described as an older model blue Chrysler, which then drove south on 23rd. Employees told the police that they have often seen the robber in the vicinity of 23rdand Union.

Finally, at approximately 9 PM on March 17 there was an aggravated assault at Union and 24th that involved a firearm. The police have not posted a detailed description of the incident because it is still under active investigation.