The overall number of incidents in Madison Valley reported to the police dropped to 43 in May, down from 56 in April. The decline was due to small drops in many types of offenses rather than following the usual pattern whereby changes in car prowls and auto theft drive changes in the overall monthly totals. Seven burglaries were reported during May and there was also another incident in which a shoplifting incident became an “armed robbery.” 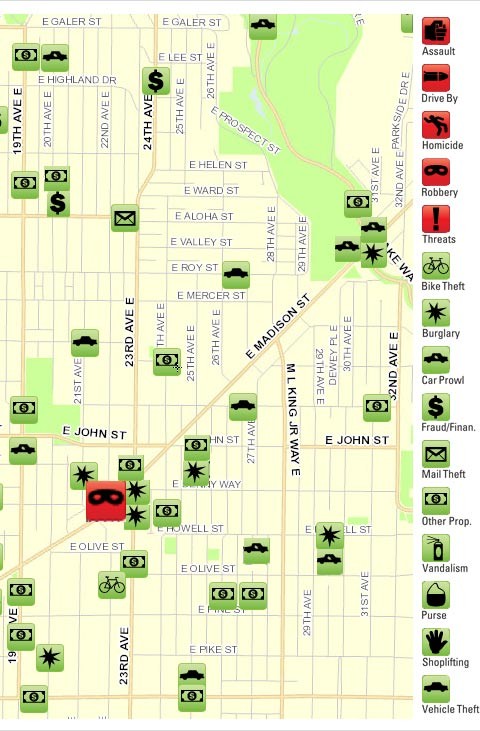 1. On May 2nd police were called to investigate a burglary at a residence on 21st Ave. E. near Denny. Earlier that day someone had taken a bicycle from an open garage and a gas grill from a patio. Police searched for fingerprints but found none.

2. On May 3rd police were called to an apartment complex on 23rd near Denny to investigate a burglary that had occurred sometime in the previous few days. When they arrived, the victim reported that someone had taken clothing and tools worth approximately $3100 from a communal storage area in the building. Although the building is secured the storage area is not. Police did not search for fingerprints because so many people have access to the storage area, but asked the building manager to determine if the event had been captured by surveillance cameras.

3. Sometime between May 5th and May 12th someone tried to break into a garden storage shed at a residence on Lake Washington Blvd. near E. Madison. When they returned home after a week’s absence, the residents found that the lock on the shed had been damaged to the extent that they could no longer open the door. Because the burglar was unable to gain entry, nothing was taken from the shed.

4. During the morning of May 7 a burglar broke into a basement residence on Howell near 29th by climbing through an unlocked window. After ransacking the rooms, the burglar stole cash and items worth approximately $1000. The police found various personal items in the residence that the burglar apparently left behind, and submitted them to the police lab for possible fingerprints. The burglar also prowled a vehicle in the driveway at the residence, and while doing so left behind self-incriminating jail release paperwork.

5. On May 11th police were called to an apartment complex on 23rd near Denny to investigate damage to several locks on doors at the complex. Although able to gain entry through the front door, the burglar was apparently unable to open any other doors. Police asked the building manager to determine if video footage from security cameras recorded the burglar’s activity.

6. Sometime during the daylight hours of May 17 a burglar broke into a storage unit connected to an apartment on 20th near Pike. The burglar took two pieces of luggage worth approximately $500. The victim did notify police of the incident until May 24th because until then he had not noticed that anything was missing from his storage unit.

7. Sometime between May 17 and May 27 a burglar stole five bicycles worth approximately $10,000 from a storage unit in a residential building on E. 25th near Denny. During that period, a contractor had been working on the building and had left the front door ajar. The burglar apparently entered the building while the door was unlocked.

On May 9th police were called to the grocery store on Madison and 22nd to investigate an armed robbery. When they arrived a clerk at the store told them that a “chronic shoplifter” at the store had threatened to shoot him when he tried to prevent the shoplifter from taking a bottle of Suja from the store. Although no one saw a weapon during the incident, both the clerk and the store manager advised the police that they were “willing to be the victim of a robbery” [i.e. willing to testify against the shoplifter – Ed.] The police advised them to provide video footage of the incident and to call 911 when they saw the shoplifter/robber again.