Eight burglaries, three robberies and an aggravated vehicular assault were reported to the police during November from Madison Valley. 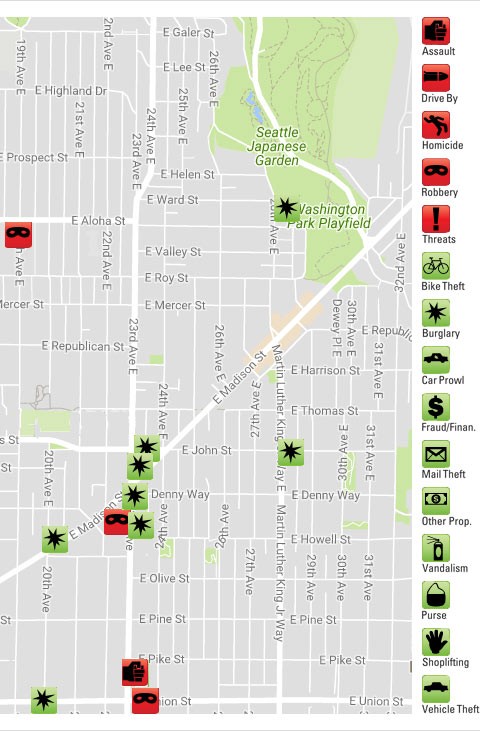 1. Sometime between 10 AM and 5 PM on Nov. 7 a burglar broke into a rental home on Ward near 28th and took approximately $8000 worth of digital equipment and jewelry. When one of the residents returned home that afternoon he discovered the burglary and called the police. The police found that the burglar had forced open a door to the lower level of the home, but were unable to find fingerprints.

2. On Nov. 10th police were called to an apartment building on 23rd Ave. E. near Denny to investigate a burglary that had happened a week earlier. When they arrived, the victim told them that she had had to go to Virginia Mason hospital for a medical emergency during the morning on Nov. 3 and that she did not lock her apartment when she left. When she returned that evening she found that various items worth approximately $50 had been stolen from her apartment. Police did not search for fingerprints because too much time that had passed since the burglary.

3. Sometime around 4 AM on Nov. 13 someone broke into the laundry room of an apartment building on John near 23rd. The building’s manager notified the police of the incident later that morning, and told them that it appeared that nothing had been taken either from the laundry room or from elsewhere in the building.

4. On Nov. 16 at around 9 PM police were called to a home on E. John near 28th to investigate a burglary that had occurred earlier that day. The victims told police that the burglar apparently entered through an unlocked front door, and that once inside the home the burglar had ransacked their bedroom, taking approximately $5000 worth of items. The police did not find fingerprints at the scene.

5. On Nov. 17 at 5:30 AM police responded to a report of a man entering a second story window of a business on the corner of 20th and Union. A witness familiar with the business and knowing that it was not usually open at that time watched while the man, described as a black male, approximately 30 years old and wearing a winter coat and hat, entered the business, climbed through the window and then emerged from the front door. After the burglar moved the ladder inside the building the witness continued watching the front of the business until the police arrived. When they arrived, the police found the back door of the business open, and that someone had removed the drawer from the cash register and spilled change on the floor. The owner of the business arrived to open for the day at about that time and reported that she had been burglarized several times previously and now kept only about $20 of change in the cash register. Police found no fingerprints at the scene.

6. Sometime between 6 PM on Nov. 17 and 11 AM on Nov. 18 a burglar broke into a storage closet of an apartment building on 23rd near Olive, pried open a key-storage safe, and took the keys contained in the safe. The police report of this incident notes that a key smith was re-keying the building during the afternoon of Nov. 18, and that nothing appeared to have been taken from any of the apartments in the building.

7. On Nov. 27 police were called to an apartment building on E. John near 23rd to investigate an attempted burglary. When they arrived, the building manager showed them that someone had tried to pry open a door to the building and told them that the burglary attempt had taken place sometime earlier that day. The manager estimated that repairing the door would cost approximately $1000.

8. There was a forced-entry burglary on Nov. 30 around 5 AM at a nonresidential building on Madison near 20th but the police have not posted a description of the incident yet.

Women with anger issues were involved in two of the other four incidents that occurred during November.

On Nov. 10 at approximately 12:30 PM a patron at the car wash on 23rd Ave. near Union apparently tried to kill or injure an employee at the site by ramming him with her car. When the police arrived at the scene the victim told them that the woman was upset because she had not received the kind of car wash she wanted, and briefly confronted him about it. After the employee returned to his work the woman, who apparently thought that the employee was a manager or owner, returned to her car and then tried to run him over as she left the car wash. Luckily, the employee was able to dodge the oncoming vehicle and received only minor injuries when he was hit by its side view mirror. Clear pictures of the incident, the woman, her car, and its license plate were recorded by security cameras at the site.

At around 3:30 PM on Nov. 6 two robbers forcibly took approximately $30 worth of merchandise that a customer had just purchased at a store on Union near 23rd. The customer, who was wearing a knee brace, was unable to chase the robbers when they fled. The customer described one of the robbers as a white male, age 16 – 19, and the other as a black male with an afro and wearing a dark hat. After the robbery, the victim returned to the store and employees then made an unsuccessful search for the robbers in the immediate vicinity of the store.

On Nov. 19 at approximately 9 AM a woman walked into a coffee shop on 19th near Aloha and asked to use the business’s telephone. When an employee told her that the phone was unavailable to the public, except in cases where students from a nearby school need to call their parents, the woman became angry and poured hot coffee into the tip jar and slapped the employee. When she left the store the woman took several newspapers that were available for sale to coffee shop customers and started walking south on 19th. When the employee tried to get the woman to return the papers, the woman hit her in the face with the papers, thereby committing robbery, and continued on her way south on 19th. When police arrived at the scene they learned that the woman had also been causing trouble at another shop on 19th, and that she had threatened to kill an employee there. Shortly afterward the police learned that the woman had just been sighted on 15th Ave, and were able to take her into custody there. After victims and witnesses confirmed that she was the woman involved in the incidents on 19th Ave., she was booked into the King County Jail on charges of robbery and assault.

Police were called to the Safeway store on Nov. 30 at 4:20 PM to investigate a shoplifting incident that had become a robbery. When they arrived, an employee told them that she had witnessed a man loading items from the cosmetics section of the store into a shopping bag. She went to inform a manager about the shoplifter, but by the time he was located again he had gone to an area in the back of the store where liquor is stored and was filling a bag with liquor bottles. When the manager asked the shoplifter to surrender the bottles, the shoplifter denied that he had any bottles and a physical altercation resulted. The shoplifter was then asked to leave the store, but instead of doing that he attempted to get into the men’s restroom. A store employee successfully resisted the shoplifter’s attempts to shove his way into the restroom, and then the shoplifter left the store with the bag of liquor bottles. After the robber left, employees found the cosmetics items he had stolen inside the restroom. The police report indicates that the shoplifter has a history of shoplifting at the Safeway store and that security cameras recorded his activities during the incident.