On its website, the Seattle Police Department provides detailed incident descriptions for several categories crime. In Madison Valley, the most common of these categories is burglary, followed by robbery and aggravated assault. Data for the past four years show that on average each month there are 7 burglaries, 1.1 robberies and .3 aggravated assaults in Madison Valley. Burglaries are not only more frequent than the other two types, they also vary more from month to month. For example, over the past four years the number of burglaries in a given month ranged from one to sixteen, while the monthly totals for the other two categories were, with only one exception, in the range between zero and two. In view of these monthly averages, September 2017 was a fairly typical month in Madison Valley because five burglaries, one robbery and no aggravated assaults were reported to the police. 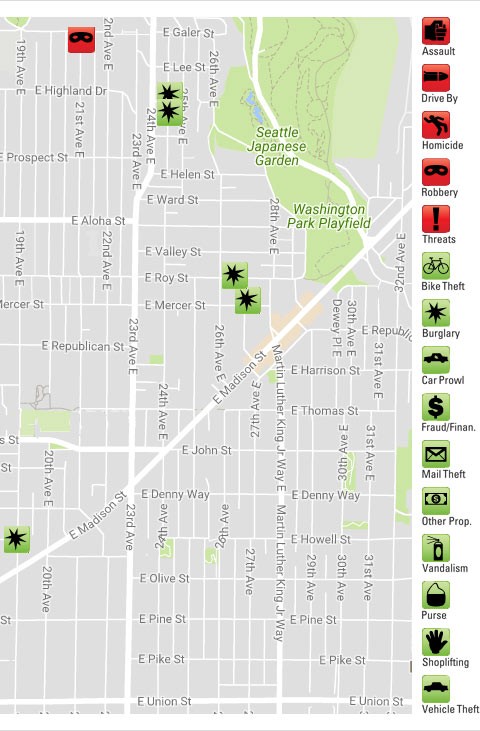 1. At 9 PM on Sept. 1 police were called to a residence on E. Highland Dr. near 24th to investigate a burglary. When they arrived, the victim told them that earlier that evening someone had broken into a locked storage unit on the property and had stolen tires and wheels worth approximately $2500. The police found no fingerprints at the scene.

2. Sometime during the night of Sept. 2 – 3 a burglar entered an unlocked residence on E. Roy near 26th while the residents were asleep and stole key rings and two jars containing approximately $50 in change. Using a key on one of the key rings, the burglar was also able to steal some dry cleaning from the owner’s vehicle. Police were called to investigate the next day and found fingerprints on one of the change jars that had been found abandoned in the neighborhood. However, a pair of white gloves were also found at the scene, suggesting that the finger prints may not be those of the burglar.

3. Also during the night of Sept. 2 – 3 a burglar entered another unlocked home nearby on 27th Ave. E close to Roy and stole items from the top of a dresser near where the owner was sleeping. After leaving the house, the burglar used a stolen key to steal the owner’s car. Police found no fingerprints at the scene.

4. Shortly after 10 PM on Sept. 12 police were called to an apartment building on 19th near Howell to investigate a burglary. When they arrived, they detained a suspect leaving the building carrying two large bags. Upon further investigation, they learned that another person, described as a tall and skinny white male wearing dark clothes, had broken down the door of one of the apartments and had entered the unit. The police report suggests that the police have information about the identity of the burglar.

5. On Sept. 13 a burglar once again broke into the storage unit involved in burglary number 1 above. After stealing cleaning supplies, a compressor and a jack handle, the burglar fled in a vehicle south in the alley toward Prospect. A security camera recorded the incident and the video footage was forwarded to the police lab for analysis. The victim believes that the same burglar responsible for the previous Sept. 1 incident carried out the this one.

The robbery reported in Madison Valley in September was an armed robbery committed in broad daylight.

On September 27th at around 4:30 PM a woman visiting from San Francisco was approached by a man holding an knife while she was walking north on 21st Ave. E. near Galer. The man, described as a young black male wearing a grey hoodie and saggy dark jeans that revealed his underwear, told the woman “Excuse me, give me your purse and just go.” The woman initially refused, but when the robber repeated his demand, she gave him the purse, which contained a cell phone, credit cards and $120 in cash. After the robber fled west on Galer, the woman returned to a friend’s house in the neighborhood and called the police. The police searched the neighborhood but were unable to find anyone matching the description of the robber.