What Happened to the Monthly Madison Valley Police Reports?

I’m sorry to report that unless the Seattle Police Department resumes reporting data on specific locations where incidents occur, it will be impossible to continue the monthly Madison Valley Police Reports series. During the past few months the SPD has been changing the system it uses to make data available to the public. This process has involved the creation of new databases which, unfortunately, specify only the general areas in which incidents occur. The SPD explains their new policy as follows:

“In an effort to safeguard the privacy of our community, offense reports will only be located to the ‘beat’ level. Location specific coordinates will no longer be provided. Beats are the most granular unit of management used for patrol deployment. In addition to the Departments patrol deployment areas, these data contain the ‘Neighborhood’ where the crime occurred, if available. This coding is used to align crime data with the Micro Community Policing Plan (MCPP).”

Unfortunately, the geographical systems that the SPD uses do not identify Madison Valley as a Seattle neighborhood. For example, below is a map of central Seattle showing the city-specified neighborhoods that comprise it. The black lines on the map show the boundaries of what the city identifies as two neighborhoods covering Madison Valley: Stevens/Miller Park to the north and Central District/Squire Park to the south. 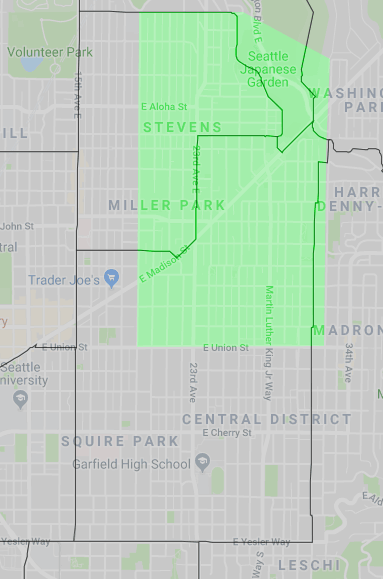 On this map I’ve also indicated in green the area that we have been using as a definition of Madison Valley. Neither of the two neighborhoods specified by the SPD nor their combination comes close to matching a reasonable delineation of Madison Valley. The same is true of the two SPD beats that cover our area (They are C2 and C3; you can see a map of the SPD beats here.)

Editor’s Note: We want to thank Lowell for his hard work on the Police Reports column over the last five and a half years. Through his efforts, Madison Valley residents have been made more alert to the issues of safety and crime. Thank you, Lowell!